Information referring to the occupancy of the Chinese on the goldfield at Tambaroura has been difficult to find, only two newspaper articles found so far give an indication of the size of the camp. In one of these articles the reporter has described where the site was. Although his description of some aspects of the area are wrong this can be contributed to it being his first visit to the area. Below are excerpts of his article which describe his walk through the town. This is only part of the actual article, we pick up on his journey to Tambaroora four miles on the Tambaroora side of Monkey Hill.

Using his description above it is possible to reconstruct his movements once arriving at the Town. He describes his walk along the Escort track from Monkey Hill, approaching Tambaroora he :

"The road now constantly ascends for three miles,... On reaching this summit I felt convinced that I was in the centre of an extensive gold-field;... the ascent had been regular, and the descent now was as regular. I had not proceeded 200 yards from the top when I saw that others were of my opinion, as prospecting holes had been sunk on the roadside, and were continued at intervals down the hill until I reached its base, when I found myself scrambling amongst the shafts and holes in the golden gully of Tambaroora."

His mention of the summit is the top of the ridge line which runs north south on the eastern side of Tambaroora township, if he stayed on the Escort Track then he would have arrived in the town at Clarke Street, if he left the Escort Track on the other side of the "summit" and took the other less known track he would have arrived in town at Mudgee Road near the Church of England Church and grave yard. see the image below:

He continues:
"Here were several comfortable cottages, with large gardens, well stocked with vegetables; the gully is several hundred feet wide, and takes a southerly direction amongst the mountains through which it finds its way to the Turon, where I did not follow it."

His description of what he saw is vastly different to how it is now, there was no gully as such, the ground was more akin to a shallow depression or shallow valley with ridges running north south on either side, it was a fertile place as noted in its aboriginal name "sweet grass". I can only assume that this was the reporters first visit to Tambaroora as he has described the fall of the gully going from north to south. If he had followed the gully south he would have realised his error. He continues:

"Every portion of this gully has been worked several times, and always yielded gold. The Celestials gave it the last raking a few months since.... Turning to the left, and following Golden Gully, it opens into Foremans Flat, extending from the base of the range across the valley. It has been worked over its entire surface, and a cloud of Chinese have lately settled upon it, and gave it a most complete overhauling."

If he had arrived at the Town by the Escort Track this would put him at the intersection of Mudgee Road and Clarke Street. Turning left would direct him towards Bald Hills (Hill End), I have identified Foremans Flat as being between Tambaroora township and Bald Hills. Foremans Flat is referred to as the address of Augustus Veil in his Insolvency document in 1874. He shared Lot 40 with his brother Jacob, see the image below.

He continues:
"As you proceed you pass through the largest Chinese encampment on the Western diggings arranged in regular streets. Here they have butchers shops and stores, containing all that their celestial customers require. Many of the tents are large and handsome, the Chinese here are evidently the most prosperous portion of the community, and the general order and regularity of their conduct is calculated to create a strong feeling in their favour"

As geographical features rarely have a defined area, the size of Foremans Flat can only be estimated, it may well have occupied the entire basin of the valley in 1859 before a frenzy occurred to name every little creek, gully and flat. The exact location of the Chinese camp may not be pin pointed but on the western side of Mudgee Road in the vicinity of the Canton Line there is evidence of Chinese occupation. Located close to and just to the north west of the Canton Line a small Chinese camp was shown on Gold Lease Application No.983 of 1874. Other claims were occupied by the Chinese in this area, Lease 1208 was held by Wah Yet circa 1874.

The reporter continues to describe his view of the village of Tambaroora as he now moves north along Mudgee Road:

"The pretty village of Tambaroora, compact and regularly built, forming one street, stands at the head of the flat, a little distance from the Chinese camp. Here are a number of stores, and five or six public houses, and there is a church and schoolhouse in the neighbourhood.... Passing the village on the left is the Commissioners Hill, the sides of which have yielded some good surfacing. As you proceed, you pass several snug cottages, each with its small garden, the flat now narrows into a shallow wide, creek along which you travel for a mile slightly ascending when you reach a low ridge, on the opposite side of the ridge the Dirt Hole Creek commences..."

The reporter has made no mention of Chinatown being in existence as he passed through the township, this would indicate that it was not occupying the site that it eventually did circa the early 1870s. As the reporter did not realise that the flow of Golden Gully was from south to north he has mistakenly said that the village was at the head of the flat.

Another article written the previous year describes the layout of the settlement which is supported by the above article. 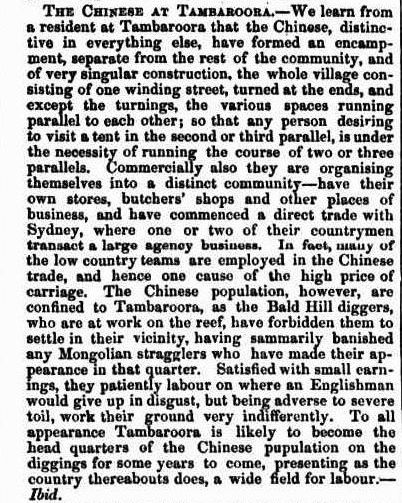 At the very least we now have an area south of the town and it makes sense to consider that the area around the Canton Line would have been the site. The same applies to the Chinese camp that existed one mile west of Tambaroora on the Hong Kong Line. Incidentally the Chinese Cemetery was located centrally between both of these early Settlements.

(Information will be added when found)