The requirement for judicial control of the recently discovered local Goldfields saw the arrival of Assistant Gold Commissioner Miller in February 1852 along with a contingent of Police to maintain discipline and management of the fields. The Commissioner decided upon a central position at the junction of Tambaroora Creek and Golden Gully located between Dirt Holes Creek and the place known as the Stockyard. The local Goldfields being worked by the miners at the time stretched from Green Valley to the Lower Turon and included Green Valley, Dirt Holes Creek, Tambaroora Creek, Golden Gully, Bald Hills, Bald Hills Creek, Turon River, Chambers Creek and Root Hog, the entire area being known as the Tambaroura.

Commissioners Camp on the junction of Tambaroora Creek and Golden Gully c.1853
(Image courtesy of the State Library of NSW)

In March 1858 a meeting was called for to take action to Petition the Governor General for the installation of a Local Court in accordance with the Goldfields Act of 1857. The Petition was received by the Executive and instructions issued to the local authorities to instigate the construction of a Court.

The 1859 Town Survey Map below shows the layout of the Commissioners Camp, its size occupied all of what was later to become Section 5. As can be seen on the map the Camp consisted of the Court House, Troopers Quarters, Stables and Troopers Garden and other ancillary buildings.

By 1859 the Camp buildings were starting to show signs of disrepair, works required to return the Camp to an acceptable standard included for the Court House a new roof of bark, shelving for documents and the inclusion of a fireplace, the Lock-up required a new roof of bark and works to make the building secure. The works were eventually undertaken by Edward Maloney at a cost of £20/0/0 (503).

The Annual Appropriation Act for 1860-61 included an amount of £135/0/0 which was allotted for the "Erection of Stable and Fencing Camp Ground, Mounted Patrol Station" at Tambaroora (504). The breakdown of the allocation was a new four stall stable of slab wall and bark roof construction including Hay Racks and Manger and paved with stone pitchers, it also included a new Men's Privy at a cost of £85/0/0. The remaining amount of £50/0/0 was for the construction of a Camp Ground fence including two pairs of gates, for a total cost of £135/0/0 as per the Annual Appropriation allocation.

Continuing ongoing costs may have led to the Colonial Architect in July 1861 writing to the Under Secretary for Public Works submitting a Plan for a Watchhouse at Tambaroora. A sum of £400/0/0 had been approved for the expenditure, included in the letter was an advertisement for tenders for the works. (503). 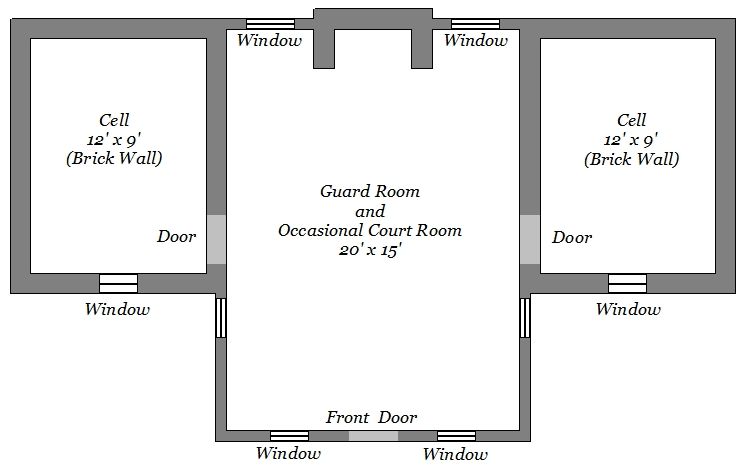 Tenders closed on the 3rd September 1861, four tenders were submitted and forwarded to the Colonial Architect from the Department of Public Works for their consideration: Included with the Architects letter and tender documents to the Department of Public Works was a letter from Mr. PM Joseph Cox at Tambaroora in which he made observations relating to the plans and specifications for the Watch House and his displeasure of having to share the Guard Room as the "occasional" Court Room as seen in Figure 1 above.

A response to Mr. PM Cox's observations was notated at the end of the letter by an unknown author.

The Department of Public Works letter recommended the acceptance of the Everett and Stephens tender price of £299/10/0. The tender was accepted in September 1861 and contracts exchanged in December the same year. (503).

Another letter from Mr. PM Cox dated 4th February 1862 to the Authorities in Sydney suggested that accommodation for the Lockup Keeper be added to the nearly completed Lockup and Guard Room, also the need to have the complex securely fenced in. The result of this was an amended plan of the Court and Watch House incorporating the addition of Lockup Keepers quarters and fencing being sent to Mr. Trader, the contractor for the Tenderers Everett and Stephens. A note written on the back of Mr. PM Cox's letter by an unknown author stated that as the successful tender was only £299/10/0 out of the vote of £400/0/0 this left a balance of £100/10/0 that could possibly cover the costs of the additional works requested by Mr. PM Cox. 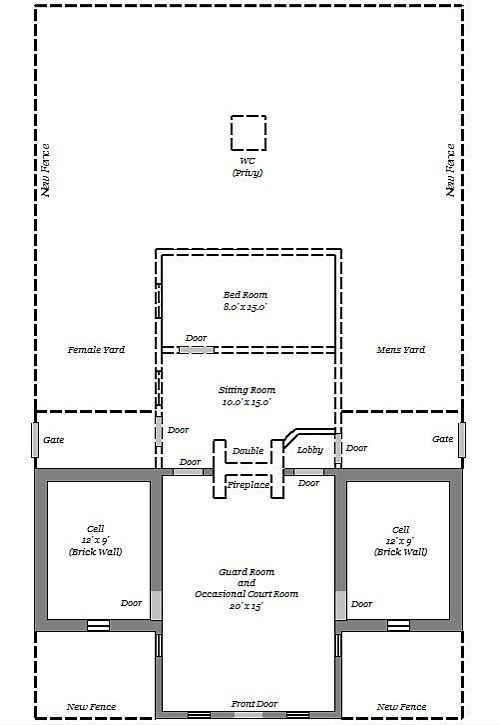 In another letter dated the 4th February 1862 and mistakenly sent to the Surveyor General and forwarded to the Principal Under Secretary, Mr. PM Cox advised that the current old and dilapidated Court House contained no furniture, he asked that an amount of £60/0/0 be allocated for furniture for the new Court House or that items could be supplied. He went on to provide a list of necessary items for the new building. A note at the bottom of this letter stated "Mr. Cox to procure 15 April 1862"

By the 22nd March 1862 the Court and Watch House was nearing completion, Mr. PM Cox wrote once again to the Colonial Architect Alexander Dawson Esq. describing the hazardous situation of the Watch House not having a fenced perimeter, he stated "without a fenced enclosure, parties can easily hand in any weapon to the confines through the cell gratings". He added that at present the Lockup Keeper's residence was 100 yards distant from the new Watch House, he pointed out that ideally the Keeper's house should either adjoin or be very close to the cells.

A letter from the Tenderer's Foreman of Works, Mr. Trader dated 14th April 1862 to the Colonial Architect gave a progress report on the erection of the Watch House, it also included proposed alterations (see Fig.3) to the building, some of which were requested by Mr. PM Cox and approved by him after consultation with Mr. Trader. The improvements were approved by the Department of Public Works and Mr. Trader was to obtain tenders for the works. 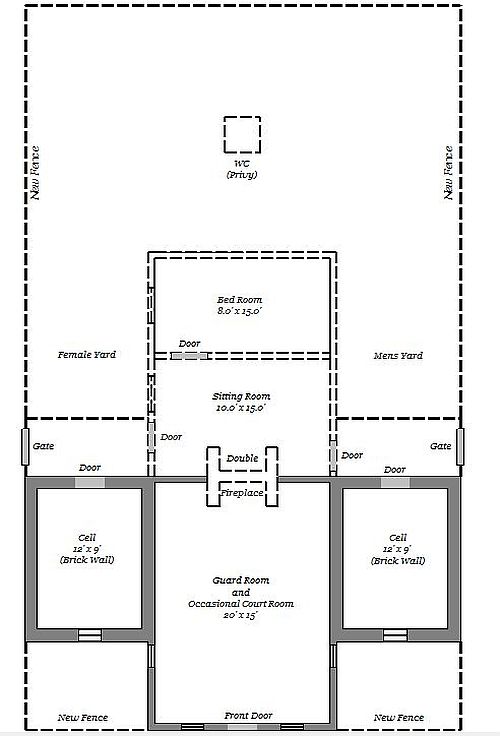 The Contract for the works on the new Court and Watch House was completed in May 1862, the Contractors Everett and Stephens requesting final payment being £334/10/0 being for:
Mr. PM Cox wrote to Alexander Dawson Esq. the Colonial Architect in the same month advising him that he had taken possession of the new Court and Watch House, he also asked to be advised as soon as possible if the alterations asked for (see Fig.3) had been approved. A notation on the letter indicated that the works will be undertaken once plans and specifications were completed.

The furniture requested earlier in February, was received in September and supplied by Redmond Farrington at a cost of £60/0/0.

By July 1863 requests for funding from the Department of Police at the Western Districts was made to replace the roofing of the Lockup Keepers quarters, the roofing being "perfectly worn out". If the replacement was approved the work was to be undertaken by the constables themselves. The bark required was about 30 sheets at a cost of 2/6p per sheet. The works was approved by the Department of Public Works in August 1863 and the materials were supplied by a Mr. Charles Gratton for a total cost of £3/15/0.

A newspaper article in 1865 did not paint a very pretty picture of the Commissioners Quarters.


16th Nov 1872 - Camp Gold Mining Company noted as covering a portion of the Police Reserve even though the site was still occupied by the Police.


2017 - Aerial view showing the outline of the Watchhouse